Consistency is incredibly important in your pickleball dinking strategy, but sometimes in an attempt to be consistent at the net, we dink without purpose and we hit what are called dead dinks.

Today we’re going to cover how to resurrect those dead dinks and turn them into strategic shots that help you win more points at the net.

When you’re at the non volley zone, you may be tempted to just get the ball over the net to be consistent, but when you do this, you run the risk of hitting shots that are predictable, straight to your opponent, that apply no pressure on them. This is the definition of a dead dink. Instead, your goal should be the opposite: to hit shots that are unattackable, unpredictable, that put mental and physical pressure on your opponents. You can do all of this by using what I like to call the DAW method. It isn’t meant to be comprehensive, but rather an easy reminder of what to do at the net instead of reacting to your opponent or defaulting to dead dinks.

The DAW method stands for depth, angles, and weakness. When you’re at the net, you can definitely do more than 3 things but the goal here is to do what has the highest probability of being unattackable and winning the rally. Here’s a breakdown of the DAW method, a pickleball dinking strategy.

When dinking for depth, one of your primary goals is to make your opponent think and decide whether or not to take the ball out of the air. The more time they spend thinking and deciding, the less time they have to react. A few practical ways to win with depth are to:

Be sure to vary the depths of your shots that way your opponent is always thinking and deciding.

When dinking, you want to use angles that force your opponents to move and stretch so that you can apply physical pressure on them. A few ways to win with angles are to:

Be sure to mix up your angles in your pickleball dinking strategy that way your opponent is constantly moving.

It’s always helpful to know your opponent’s weakness, so that you can include it in your pickleball dinking strategy. For example, do they have a weaker backhand and try to run around it at the net? Do they tend to stand back from the kitchen line?

Pickleball Dinking Strategy: Putting It All Together

Sometimes your opponent will push you deep or wide and force you to move. If you choose not to take the ball out of the air, you may be tempted to hit the ball from behind your body or outside of your optimal contact zone. This can easily cause a pop up. Instead, choose to take a step back, keep the ball out front, and return an unattackable shot.

Were These Pickleball Dinking Tips Helpful? 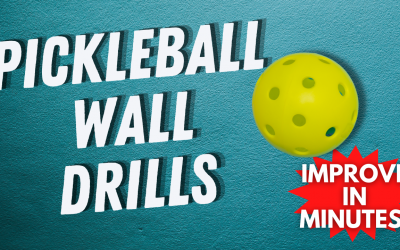 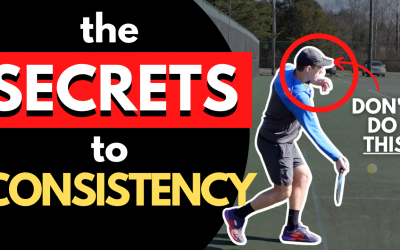 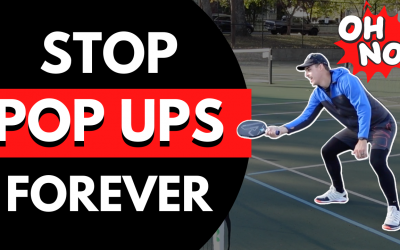 Anyone who has played pickleball knows how it feels to cause a pop up.

Whether you’re causing the pop up or getting hit with the ball because of a pop up, this is one of the worst feelings. Today we’re going to cover the common reasons why pop ups happen and the pickleball tips you can use to stop them. It’s my hope that with this video you’ll learn how to eliminate errors from your game, play with more consistency, and win more points at the net.